Double programming is a gold standard in a team of statistical programming and analysis. The necessity of doing so, is to ensure that the data is being processed correctly and the analysis is being conducted correctly following the pre-specified requirements such as the SAP document. In the end, the beauty of the practice is that same results are achieved by two or more different approaches. Often times the approaches are independent from each other and might even begin with divergent understanding of particular analysis methods. Ultimately, accuracy will be achieved when differences are reconciled and critical understandings converge, just like the team-work between left-hand and right-hand! 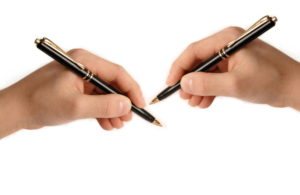 Generally speaking, the initial programmer has certain advantages such as choosing/using naming conventions, setting up output layout formats, and applying statistical procedures etc. The QC programmer would generally focus on checking the accuracy of the content of the output and analysis results. Plus, they would follow the variety of conventions that has been set up by the initial programmer.